Customers often look at us with mouths wide open, gawping at how effortlessly we leap from rock to rock in the canyon. It’s almost as if we were born as ready-made canyoning guides. But today we’re going to let you in on a little secret… There was a first time for all of us. At one stage we also walked through the canyon feeling like a baby giraffe taking their first steps, and we too felt our stomachs shrink at the prospect of the 8metre jump. So we thought we would share with you first time experiences of some NZ canyoning guides , and how we eventually all became the guides that we are today. 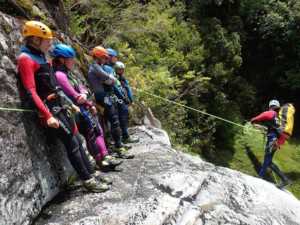 What were you all doing before you became NZ canyoning guides?

Lana: I was teaching kayaking and managing a ski school in Canada.

Lee:  I was working as a Co-ordinator of International Relations for a small Board of education of a small town Called Sakuho, in central Nagano, Japan.

Rosie: Prior to guiding I was studying Biology in the UK, but before this guiding job I was working in the Alps helping to manage and run a chalet company.

Mitch: Before I came here I was freelancing as a Canyon, Rafting, Mountain Biking and Canoeing guide back in central Scotland for a few years. Before I started guiding I was a bar / security manager at a bar in Glasgow.

Drew: Before I became a canyoning guide I had spent most of my time on the river: rafting, kayaking and canoeing. Prior to that I had a job at a marina, servicing boat engines. Launching and selling boats was another part of the job – it was actually a pretty sweet gig! My claim to fame, I once sold a boat to the famous Scottish comedian Kevin Bridges. True story.

How did you get into canyoning and guiding?

Lana: My visa had run out in Canada so I had to come back to New Zealand. I had never canyoned before and wanted to learn something new and stay in the outdoor industry.

Rosie: I was travelling around Europe with lots of ropes for caving and wanting to go “caving with no lid on!” for a holiday after spending weeks on caving expeditions. It turns out canyoning isn’t really like caving, but really good fun! I got into guiding canyoning having guided other sports. I think it all started on a road trip from a caving expedition in Austria, where we added on a holiday to Slovenia. We decided to go canyoning down Susec, which was starting to flood so we had to escape part way down.

Mitch: Whilst working for a children’s multi-activity camp I was getting pretty keen on climbing, walking, water sports etc. We started finding some burns (small rivers) to do some gorge walking, climbing, jumping and scrambling in. This progressed onto canyoning with friends for fun and eventually onto guiding and it’s now my main sport. 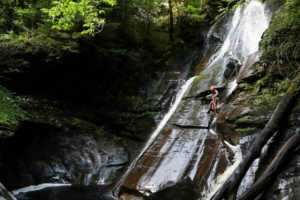 Drew: I became a canyon guide when one of the companies I started working for back in Scotland offered canyoning as an activity. I had a vague idea of what it was about having done a little gorge walking in the past. Part of the job offer was that I would be trained up to be an assistant guide in the canyon, which sounded good at the time so I snapped up the offer – little did I know then that it would send me down the path that I’m following now! It’s meant that I’ve met some of the coolest people and visited some of the most incredible places. Let’s call it the happiest accident.

How old were you?

If you remember, what was your first ever canyon?

Lee: My first ever canyon was ‘Hanage Canyon’, which translates to Nose Hair canyon (a rock feature that looked like a nose with water spraying out of it, which looked like hair…) It was pretty sweet, it had a 25m low angle slide in it!

Mitch: ‘Falls of Acharn’, on the banks of Loch Tay in Scotland. I was being led down by a friend and loving life. It was a beautiful canyon that was amazing fun! 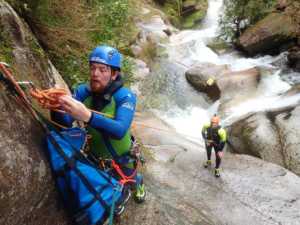 Do you remember the way you felt during that first canyoning experience?

Lana: I remember it well, most of it was super exciting. Then there was the part where I didn’t think I would make it out alive. That was the first time I abseiled through the full force of a waterfall. It’s actually pretty okay to do, I have since realised.

Rosie: A little unnerving at first, but then I adjusted and loved it!

Mitch: All I could think was, ‘Why have I never done this before?’

Drew: Oh man, I was so so happy – and of course I’ve never looked back since.

Interested in becoming a canyoning guide? Have a look at the New Zealand Canyoning School. 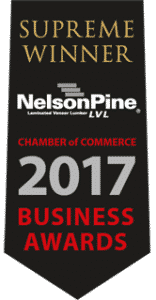 During the peak season, school holidays, and public holidays we will be open every day. Outside these periods we'll be open Friday - Saturday - Sunday - Monday.

If your preferred day is not available online, please contact us. On a case by case basis we will still be able to run trips on those days, especially for groups.

From Toine, Eva and the Abel Tasman Canyons Team.